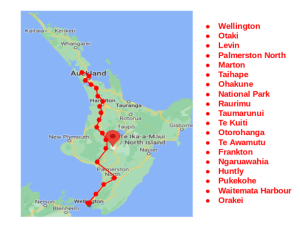 The map above is a map of Michael Joseph Savage’s funeral train, as well as all the places visited by the train. When Savage died, the whole country mourned. To send him off, they held a funeral train traversing the whole north island. The train stopped at around 20 stations, those stations were filled with people, all with many prayers to offer. The train eventually stopped in Auckland, burying him in Bastion Point.