Manatees, also known as sea cows are in a really bad situation right now, Manatees are an endangered species with only 13,000 left in the world. Manatees live in rivers and feed on seagrass and algae. Right now, manatees are facing a food crisis. Algae that form on the surface of the water are preventing sunlight from reaching the riverbed, where all the seagrass is at. Because of this, the seagrass isn’t able to do photosynthesis.

Other things are causing manatees to die off. One of the main things that were causing manatees to die in the previous years were boats. Manatees are very curious creatures, so when a manatee gets too close to a boat, it may get shredded by the propellers. Thousands of manatees die every year because of this. Pollution in the water is also a big threat to manatees. Pollution is a common threat among most sea creatures, so the manatee’s case isn’t much different than, let’s say whales. People have come up with many solutions to solve pollution, but some still don’t follow them, which is why pollution is still a threat.

Manatee’s, like all creatures, are special and should be cared for. All animals on earth deserve to be cared for. The Earth won’t last forever, so it would be nice to experience these animals while we still can. One day, your descendants may not be able to experience such unique animals that live today, so you should always care for the Earth, for everyone’s sake. 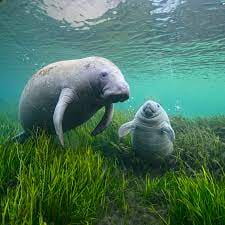